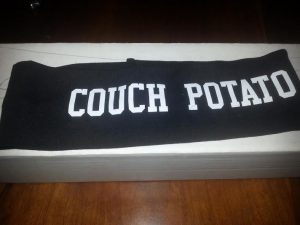 On Mother’s Day, I ran my first 5K. After two decades of cheering on my kids at sports events, I wasn’t on the sidelines. I was an athlete.

I couldn’t have done it without my coach.

I’ve never had a real coach before. In high school, I didn’t participate in sports. My mother had a horse stable, so my free time was filled with mucking out stalls or riding horses out on the trails. As a young adult, I was outdoorsy. I hiked and biked with friends, but I was never physically competitive.

Then I had children. My free time drained away. I had little time to exercise. Somehow, three of my children became athletes anyway. They were champion distance runners. My oldest two were lucky enough to have a coach who also taught English at the high school and was a great communicator. More importantly, he was inclusive and positive. Even if the team lost, he’d say, “That’s okay. You did great. You beat your personal best!” Or, if that didn’t happen: “You’ll break that record next time!”

My youngest son attended a different school. But he, too, had a wonderful coach, a guy who also taught biology and astronomy. The kids adored him. Not surprisingly, many of his runners went on to study science and engineering in college.

All three of my children became team captains under the mentorship of these coaches. Their years of hard practice, of fitting in homework around sports, and of mentoring younger athletes turned them into confident college students.

While my children were running, I was sitting. I played tennis for a while, but work and money got in the way. Without scheduled physical activity in my life, I was reduced to forcing myself to the gym three times a week for odious sessions on the treadmill. I steadily piled on the pounds.

Then I saw an ad in the local paper for a couch-to-5K program with Nancy McCarthy, a personal trainer and cofounder of Natural High Fitness Club in Newburyport. I actually cut the ad out of the paper and put it on the fridge with a magnet, so I’d see it every time I got more ice cream.

“I probably can’t afford it,” I muttered as I finally emailed Nancy.

She told me the program was free.

“My knees are almost ten years older than yours are,” she replied. “We start very slowly and this program has a 95 percent success rate.”

With no more excuses, I went to the first practice session on a Saturday morning. It was cold and windy. There were a couple of dozen other people. We did a run-walk session around the track. I thought my lungs would explode, even though we only ran for 60 seconds at a time. I couldn’t imagine running for even two minutes, never mind 5K.

But I went to the next session and put myself through the torture again. This time, I ran for 90 seconds at a stretch. We continued the practices three times a week, 20 minutes at a time, upping the number of minutes we spent running each week.

Why did I keep going back? Because of my coach. Nancy was high-spirited and cheerful. She had the body and energy of a teenager. Most of all, she positively believed in each and every one of us.

“You don’t think you can do it, I know, but you’ll all be running for twenty minutes at a time in just a few weeks,” she promised. “Remember our mantra: ‘Prepare, believe, achieve.’”

Gradually, our group became a team. I learned people’s names and their life stories. They heard mine. I found a couple of women who ran at my pace. We began running at different locations. Within five weeks, we’d worked our way up to running for ten minutes twice in one session.

The practices became something I looked forward to at the end of the day, because I could give myself over to the physical effort of following Nancy’s commands. She’d blow the whistle, and we’d all start running. I ran because everyone else did.

And, whenever I desperately wanted to walk—usually as I approached a hill—Nancy would suddenly materialize at my elbow, encouraging me to “take it slow, cut your steps in half.”

Once, she did this even though she’d been on the opposite side of the pond we were circumnavigating, appearing so suddenly behind me, it was like she’d popped out of the bushes.

“Where did you come from?” I protested. “Do you have a clone or something?”

I kept running because I didn’t want to disappoint my coach. She believed in me.

My knees complained. So did my lower back and my ankles. Not much—not real pain—just twinges of discomfort, reminding me that I’m not only a beginning runner, but an older one and overweight besides. Sometimes it was awful. But, once in a while, I felt a glimmer of delight.

“There’s a 5K coming up,” Nancy told us. “The Mother’s Day Indulgence 5K. Some of you might want to try that.”

Oddly, I did want to try it. I wasn’t nearly ready—I hadn’t run more than 22 minutes straight on any of our practice runs—but I decided to use it as a practice run for the 5K we were working toward in June, the race that marks the end of our couch-to-5K program.

I signed up. And, on Mother’s Day, I rose at 6:30, ate a banana and toast with peanut butter, and drove to the race. A few of my teammates were there.

How often, in our adult lives, does anyone say that to us? Who, as you go about your day, reminds you to be proud of your accomplishments? Or makes you believe you’re capable of doing even more?

A great coach exemplifies and communicates that sort of praise and positive attitude. All coaches push you to train harder, but the really great coaches, like the ones my kids had, and like Nancy, are those who push you to have enough faith to push yourself.

During the Mother’s Day 5K, I was passed by women in tutus, small children, and even women pushing baby strollers. I had set the bar low—my aim was to finish in under 45 minutes, try not to be the last one in, and avoid throwing up.

I admit it: there was one moment where I thought, “Why did I want to do this?” I wanted to quit and walk.

But, just as I had that impulse, I rounded a corner and there was Nancy, cheering me on. “You’re doing it!” she yelled. She was actually jumping up and down.

I grinned at her. I was doing it! 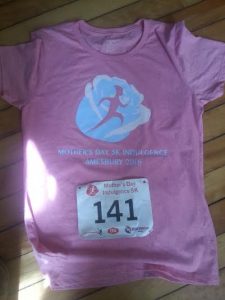 Yes, that’s slow. But I crossed the finish line. I met my goals. And, because of my great coach, I know I can run the next 5K in June.

Maybe even a few seconds faster.