In my case, I haven’t just killed my darlings. I’ve conducted a bloodbath. A slaughter fest. A series of gory Halloween-style chainsaw moments that would make even Stephen King cover his clever eyes. And it was all to make my editor happy before she ever saw the book. 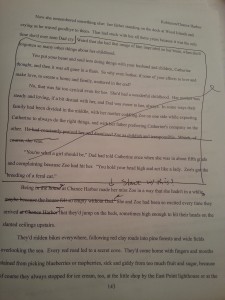 I’ve had to do this sort of thing before. My new novel, Haven Lake (April 2015) landed on my editor’s desk at 498 pages. When I told her how long it was before I sent it, she groaned and winced. (I had to imagine the wincing, since we were on the phone, but maybe she was frothing at the mouth.)

Haven Lake has two primary settings–the Berkshires and the Massachusetts North Shore –and features three different points of view, two mysterious deaths and Vietnam as a backdrop. Trimming was done painstakingly by both of us, sentence-by-sentence.

With my new work-in-progress, Chance Harbor, I tackled three points of view and three settings—Prince Edward Island, Cape Breton and Massachusetts. This book, like my others, is an emotional family mystery, but even I didn’t correctly foresee how many skeletons would come tumbling out of the closets until they clonked me on the head. And I wrote the synopsis!

When I finished the manuscript for Chance Harbor two weeks ago, it was 599 pages long and weighed more than my Pekingese. I called the editor in a panic to convey the bad news.

The book was due in a week. I had no recourse but to hole up in one of my favorite writing retreats—a cheap rented condo on the icy coast of Maine—and bring out my machete. I couldn’t imagine how to begin at first, since I loved every scene and character and sentence in the book. Gradually, though, I began spotting things I could jettison.

Maybe it was my steady diet of frozen chicken pot pie and wine. Or the fact that it was too cold to venture outside, even to the gym across the street. At any rate, I managed to whittle the book down to 480 pages in three days. In doing so, here’s what I learned about the art of murder by red pen:

Now take out your machete, sharpen the blade and start slashing! Just watch out for your shins.