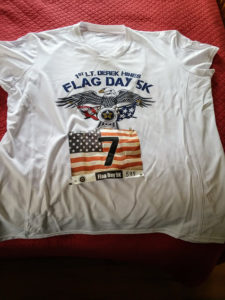 I’m no athlete. I made the cheering squad in high school only because I was loud and had a job shoveling horse manure, so I was strong enough to hold up the bottom of the pyramid. As the years went by, I begrudgingly joined a few gyms and made halfhearted attempts at using treadmills and other torture devices, but nothing stuck.

Then, a couple of years ago, I noticed an ad in the local paper for a “couch-to-5K” program. No way could I afford it, I thought, but when I emailed the coach, she told me it was free. Ha! Well, I probably couldn’t make the practices anyway. I work, right? But, when I emailed her to tell her this, the coach shot back a note saying the group met on Saturdays and in the evenings. Out of excuses, I dragged myself to the track and began putting one foot in front of the other.

It was hell, but a hell made tolerable by the fact that other people were panting with me in our walk-run training sessions. I made it through the first 5K after six weeks of training, and didn’t even come in last. (Yes, I set the bar low.)

After that, I thought I’d probably stop running, like I’d quit every other exercise regime. Instead, a funny thing happened: I began to feel better when I was running consistently than when I wasn’t, and stuck with it. Now I run three to five miles almost daily, and I’m getting ready to do a 10K.

How did I keep running even through the times I hated it? Here are a few strategies that worked for me. I hope they’ll help you, too.

It Starts with the Shoes

For years, I wore the wrong shoes to exercise. I didn’t know this until I actually went to a running store and asked their sales people to evaluate my stride. (Yup, it was humiliating to have these clerks, all built like greyhounds, watch me puff away on their treadmill indoors). They told me to go up a half size and buy wider shoes to accommodate my various arthritic humps and bunions, and boy, I’ve never had such comfortable footwear. It might cost you a few more dollars to get shoes this way, but do it. You can’t run if your feet hurt.

Many coaches encourage runners not to listen to music. It’s a safety thing, obviously, especially if you’re running on roads. But I would have quit running for sure if I hadn’t had music to keep me going, so get an iPod nano and make some play lists, or subscribe to Spotify and use your phone.

One of the mistakes I made when I was trying to run on my own many years ago was that I’d bolt out the door and get discouraged when my lungs couldn’t keep up with my legs. Even now, I always walk for five minutes or so before I start running, and hey, if it’s a hot, humid day, I still walk now and then. So what? I’m covering the same distance, and gradually I’ve had to walk less and less.

People told me to vary my runs, but I didn’t believe in the value of this until I tried doing it myself. Why would I drive anywhere, when I can just start running out of my own front door? Because it’s freakin’ boring, that’s why. After a year of circumnavigating every road in my neighborhood, I was sick to death of the scenery. Driving to new places takes a little time, but you’ll cover more distance if you have new things to look at. Signing up for 5Ks in different towns is another great way to discover cool running spots.

Once I’d gotten used to the idea of driving different places to run, I also began experimenting with trail running. This is my newest favorite thing. Yes, some trails are tricky—again, it’s fine to walk if you’re descending a steep gravel hill and don’t want to break your hip in the middle of nowhere—but the beauty of loping in the woods like an antelope (okay, I’m an optimist with an imagination) makes up for the extra footing challenges.

Add Some Weights and Yoga

Running is a great cardio exercise, but don’t forget to work out your arms and abs—add some weights a few days a week. It’s also important to keep stretching the muscles you’re growing. I added yoga two or three times a week, and it has made a huge difference in my overall strength training. Plus, who doesn’t want to lie on a mat after running five miles?