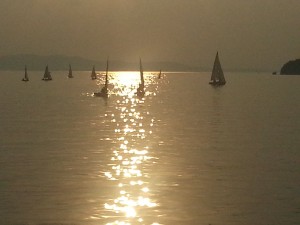 Like most parents with juniors and seniors in high school, I’ve spent some of my summer touring colleges. This was my fifth time around, so I thought it was time to pass on what I’ve learned.

Does It Really Matter Where Your Child Goes to College?
In our experience, not so much. We had three children graduate from private schools—one Ivy, two middle-reach schools—and one from a large State university. All four of our graduates landed jobs and are supporting themselves. Three are working in their chosen fields.

Without exception, our children were hired not because they had degrees or graduated from a particular school, but because they had done other useful things during their college years. Press your children to take advantage of field work, internships, co-ops, part-time jobs, and any other sorts of opportunities that translate into work experience on a resume. For instance, one of our sons earned a film studies degree, and is now working as an art director in Hollywood because he had a summer job as a carpenter. His tool belt helped him land entry level positions and move up quickly from there because of his degree. Another son, an English major, wrote copy for web sites while in school. He was immediately hired by a big PR firm to develop digital copy for company web sites.

And by the way? The child who went to the large (and affordable) State university received the most job-related opportunities after graduation. She’s now in grad school but has easily found work along the way because of her hands-on experiences. Relax. Your kid doesn’t have to go to an Ivy to succeed.

Let Your Child Drive
I mean this both figuratively and literally. Literally, let your child drive the car at least part of the time. Your child is about to feel—and be—independent. Driving will allow your child to “feel” how far away a school is, what the surrounding area is like, etc. That’s all important information. It’s also crucial for your child to drive the college tour process, helping you plot out your journey. The initial list of schools to tour should be your child’s. (Ideally, your child will have generated that list with a guidance counselor who has given him or her a realistic expectation of what qualifies as a “reach” or a “safety” school based on your child’s high school record.) Then you can add a few.

Don’t Judge a School Until You’ve Seen It
Every college will trumpet about “hands-on experiences,” “personal attention,” “topnotch faculty,” and their U.S. News & World Report status. That’s fine, but see the schools for yourself. A lot of teenagers don’t really know what will “feel” right until they actually stand on different campuses. Try to walk around in the city or town the college is in as well as touring the campus. Trust me. Your child will know if a school fits.

Ask Questions
When it’s question-and-answer time on an admissions tour, don’t be afraid to ask questions that might embarrass your kids, like what the freshman advising system is like, the student retention rate, what percentage of students do internships and coops, what the career development office does during the years your child is there, what social activities are offered on weekends, etc.

Eat Your Way Across the Nation
Since our youngest is a boy, I packed lots of food in the car this summer. Yet we stopped every two hours to eat in restaurants anyway. Why? Because eating on campus or in restaurants in a school’s geographic area is a way for your child to visualize what it would be like to live there. Most schools will let you eat in their dining halls, so be sure to do that as well.

If You Miss a School on Your List, It’s Okay
There are only a certain number of days in your vacation, so you might not make it to every school on your child’s list. That’s fine! Encourage your child to apply anyway. If he or she is admitted, you can go to one of the “admitted students” days, where the college will try to woo you with food and information. Many colleges also arrange overnights for prospective students.

No Matter What, Don’t Panic
I’ve had children balk on tours and demand to leave “because the kids here are all posers.” I’ve had children say they’d slit their wrists if they had to attend a certain school, then choose that school and be happy there anyway. One of my daughters told me that a certain dormitory “is begging me to throw myself out the window.”

Two of our children decided to transfer after they’d spent a year or two at their top choice schools and discovered they didn’t like them. They both ended up in better schools—sometimes admission to a top-tier college is easier if your child has already earned good grades at another school.

My point is this: no matter what choice your child makes, don’t panic. Take a close look at the financial packages—be sure there aren’t a lot of loans embedded in the package, and definitely calculate in the cost of two or three roundtrip airline tickets per year if the school is far away—and then, if the school your child chooses is affordable, go for it. Never mind if you don’t think it’s the right fit, or if you really wish you had a good excuse to spend Parents Weekend in Vermont (where I took this picture while waiting for my son to check out a skate park near the University after our tour) instead of New York City. The most important thing is that your child is happy with the choice and ready to embrace the experience of college.