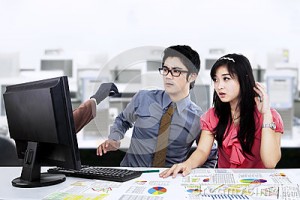 I write emotional family mysteries, the sort of fiction where the characters suffer through freakin’ horrible crises: abandoned children, missing parents, wandering husbands, suicidal wives, etc. Give me some characters, and I’ll show you how to torture them.

When I wrote the synopsis for Folly Cove, a novel about three sisters who grow up in an historic inn (to be published by Berkeley in Oct/Nov 2016), it seemed to hit all of my favorite high notes. I was gleefully rubbing my hands as I anticipated the pleasure of making my characters cry, rage, or even lie prostrate on the ground with grief before they could resolve their conflicts.

Since I had less than a year to write the manuscript, I began churning out thousands of words every day. Things started out smoothly. I’d decided all three sisters should have points of view, and I loved their voices. This was going to be a snap to write.

But then, about 200 pages into the book, their mother began bullying me. “I need a voice, too,” she demanded.

“No,” I said. “You’re meant to be an enigma to your daughters! Besides, I don’t have time to go back to the beginning of this book and rewrite everything. Forget it.”

But the mother—Sarah—kept pounding on the doors and windows of my brain until it felt like a jack hammer was drilling 24/7.

“What about this,” I said finally. “You can have more dialogue. I’ll even let you go out on a date, Sarah. But you do NOT get a point of view. I’m sorry. There’s just no room.”

By then I’d reached, oh, maybe 300 pages. But Sarah refused to shut up. So I decided to let her out just a little. “Fine,” I told her. “You know how JoJo Moyes let a few secondary characters have their say for just one chapter each, in Me Before You? That’s what I’m going to do here. You can speak one time. So make it good.”

The thing is, Sarah had no intention of speaking only once. Her point of view turned out to be so enlightening to me, as well as to her daughters, that eventually I caved and put her in the book. That meant revising the entire novel. My hands were lame from so much typing because I was running out of time. 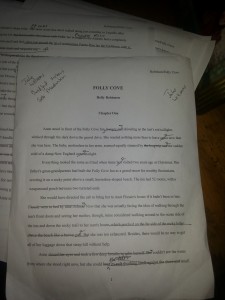 “You can thank me later,” she said as I finished her last scene.

The next characters who refused to behave were two of the husbands. I’d made one into a lying jerk—only to discover that his secret was causing him to suffer even more than his wife. Another husband, who abandoned his family for thirty years, surprised me by having some good reasons for leaving.

But probably the worst rebel among the characters in Folly Cove was the youngest sister, Anne. She wanted to be in both the first scene and the last scene of the book, no matter how much I tried to give that honor to her oldest sister. “The editor will agree with me,” I assured her.

“No,” Anne argued, “you need me here. I’m the one you like the most. Come on. Admit it. Who do you identify with in this book?”

Anne was also pigheaded about falling in love again, even though it was far too soon after the relationship with her baby’s father disintegrated. “You don’t want me to be alone and unhappy when you end the book, do you?” she pouted.

I argued in favor of her being an independent woman. “Come on. Do you really need a man in your life?” I said. “I’m not writing a romance here. And you should take some time on your own to process stuff.”

Finally I caved in to her, too.

And you know what? The book took much longer to write than it should have—I’m barely going to scrape in under the deadline—but it’s better because I let the characters hijack it and take it for a ride.

Bottom line? It’s fine to carefully craft (translation: sweat over) a synopsis or an outline for your novel. But, if the characters want to take over, let them have their say. They may surprise you by teaming up to make it a better book—even if they’re only doing it to get back at you for all of the other characters you’ve tortured in the past.