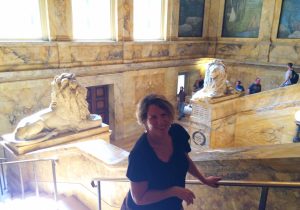 I recently had the honor of speaking at the 2016 New England Library Association Conference. As I walked up the steps to the podium, I kept my eyes focused on the stairs, hoping I wouldn’t pull a Jennifer Lawrence Oscar’s Night move and trip on the way up. I was anxious. What qualifications did I have to tell librarians anything?

The truth is that I am in awe of librarians. They are the most curious, agile, techno-savvy people around. They have figured out how to go beyond offering books to the public and now provide anything else you can imagine: concerts and community summer reading programs, museum passes and meeting rooms, teen lounges and lectures. Even more amazing is the fact that our librarians—along with the help of involved volunteers—have figured out how to pay for all of these resources and services, despite the constant budgetary battles over scant public funding.

Libraries are among the few public institutions that are truly democratic. Librarians are the gatekeepers to these beacons of hope. They are the keepers of our intellectual and cultural history, welcoming everyone who walks through their doors. Rich or poor, young or old, you can use the library to find a book, research your family history or school project, and lead your children into a life of literacy.

I am not a librarian. I am a novelist, and not even the literary sort. I write commercial fiction and occasionally produce the odd essay or article. My office is in a barn behind my house, and my work clothes are usually sweatpants and a flannel shirt.

What could I possibly say to all of these knowledgeable, skilled librarians looking up at me expectantly, now, from their empty dinner plates, probably tapping their fingers because they’d already had a long day?

The truth is that I would not be a writer at all if it weren’t for public libraries. I never even met a writer growing up. I was the child of a Navy officer who, at some moment on board his destroyer in the middle of the Mediterranean, decided it would be a good idea to raise gerbils when he retired. Yes, gerbils: Dad had read a magazine article about gerbils being “America’s newest pet,” and decided to learn more about them. He raised gerbils everywhere the Navy sent us, from a ranch house in Virginia to an apartment building in Kansas, and finally on a farm in West Brookfield, Massachusetts. (Don’t believe me? Have a look at my memoir, The Gerbil Farmer’s Daughter.)

The house we bought in West Brookfield had literally been the town’s poor farm. It was a huge ramshackle place, about eighteen rooms, many with transoms over the door. “That’s so they’ll know when people died in their beds,” my parents told me.

I was fourteen when I moved to that house and I hated everything about it. I had nightmares about dead people coming to my room. I hated being on a road in the middle of apple orchards and struggling dairy farms. I hated going to a high school where everyone laughed at my accent—a mixture of southern and Midwestern–and I hated living in a town where everyone called my dad “Captain Mouse” because they didn’t understand why we had barns full of rodents behind our house.

Over the next couple of years, I was bullied for my accent, my strange clothes, and, more than anything, simply for not being from there. My sanctuary was the Merriam-Gilbert library in West Brookfield, MA. It was a small brick building, but each time I walked through that doorway after school, I entered new worlds. I read Raymond Chandler mysteries and Dorothy Parker essays, steamy Jacqueline Suzanne novels and the crisp dialogue of George Bernard Shaw. Almost as important as the books I read were the librarians who led me to them, and who always welcomed my presence.

In this tiny brick building, basically unchanged since it was built in 1880 by funds donated by Charles Merriam, who had been born in West Brookfield and earned his fortune with Webster’s Dictionary, I was preparing to be a writer. I just didn’t know it yet.

Fast forward to college. I was convinced I was going to be a doctor and studied biology. My last semester, I had to fulfill an elective and took a creative writing course. It was taught by a visiting scholar, a novelist from New York. Once I sat down to write my first short story, the rest of the world disappeared. I no longer wanted to be a doctor—imagine how happy my father was about THAT decision—and instead took the next year off to work odd jobs. I told my parents that, if I didn’t get published and, what’s more, famous, I would quit writing and go to medical school.

That didn’t happen. Instead, I worked at odd jobs that gave me time to write—construction, waiting tables, even proofreading telephone books—and kept writing stories. None of them got published. I decided I needed a better education in literature, so I earned a Master’s in Fine Arts in Creative Writing at the University of Massachusetts in Amherst. They let me in despite my GRE scores—I aced the math section but tanked on the English–and I practically lived in the University library, catching up on all of the great literature I had neglected until then.

Since I was working odd jobs to support my fiction habit, I couldn’t afford to buy many books. Nor could I afford a decent desk or work space. Everywhere I went, the library was my second home: in San Francisco, California; Guadalajara, Mexico; Wakefield, Massachusetts and many other cities. I got married and had my first child, and began working as a freelance writer for magazines and newspapers. Publishing nonfiction was easy, but I still yearned to publish a novel. I needed to meet writers, I decided, and so I began attending lectures by local authors. Where? At libraries, of course!

Virginia Woolf is famous for saying that to be a woman and a writer, one needs a room of one’s own and five hundred pounds a year. She didn’t have children. I would add that every woman writer with children needs that room of her own to be somewhere outside the house. With so little money, I still had to rely on the library to provide me with a quiet writing space. Study carrels, tutorial rooms, reading rooms, conference rooms…I found them in my local libraries.

Today, I am the author of a memoir and six novels. None of that could have happened without libraries and the staff that helped me find the books and research materials I was looking for—and much more besides. I have an office and my children are mostly grown, but I still rely on libraries for quiet writing spaces and resources.

I wrote a good part of my newest novel, Folly Cove, in two different public libraries. I’m also currently researching an historical novel, and guess what? Librarians have guided me, providing me with essential historical documents related to my character and books about the nineteenth century.

As I stood before these New England librarians gathered for their conference, it occurred to me that I knew exactly the right words to say after all: “Thank you.”