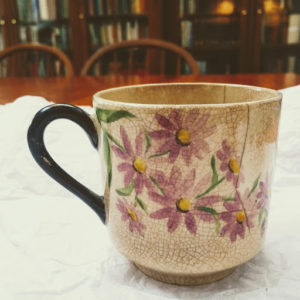 As necessary as libraries have always been to me for books and quiet spaces, until recently I never understood that libraries provide one more essential service: curating and maintaining special collections for scholars and writers.

As the author of contemporary fiction, the only research I’ve had to do involved gathering firsthand experiences in, say, making pottery or sheep farming. Then, for a series of complicated reasons that included a museum visit and my love of gardening, the muse brought me the idea of writing a book set in the 19th century. There are two plot lines revolving around a mystery and clues planted in a hidden garden. One of those plot lines features a contemporary character, while the other is set in 1878 on the Isles of Shoals, where Celia Thaxter, one of the country’s most beloved poets at that time, ran one of the country’s first grand seaside resorts, Appleton House, and had a famous garden.

I loved the idea of the book, but I was wary about being able to write it. I have never been much of a history buff. When I went to school, history was taught in a way that ensured most children would be asleep within ten minutes of the class starting, because of the emphasis on memorizing dead people’s names and dates of distant battles, so I knew little about the 19th century.

As I started writing the novel, my ignorance became apparent whenever I had to describe things like what my characters were wearing or eating. It’s easy enough to research things online, and I was able to find three biographies of Celia Thaxter; however, I still felt like my writing in the historical plot line lacked vivid imagery, believable dialogue, and attention to detail.

And so I started stumbling around in libraries, and discovered an entire world of special collections curated by librarians who were generous and enthusiastic about guiding me on my journey.

My first find was a cache of letters in the Boston Public Library written by Celia to her best friend, Annie Fields, wife of the publisher James Fields. (Can we please just say “Eureka!?”) While some of those letters had been collected in a book, many had not been, and they often contained juicy bits about Celia’s life. These letters are in her handwriting, on her stationery, and there was something mind-blowing about being able to really “feel” Celia’s personality through her penned words.

I read through about half of the letters and began writing the novel. Later, when I wanted to make an appointment to read the rest, I was devastated to discover that the library was undergoing renovations and they were digitizing the archive, so I couldn’t access them. Then the Curator of Manuscripts, Kimberly Reynolds, flew to my rescue, suggesting that I could send her a flash drive and she’d have the letters downloaded onto it and mail it back! 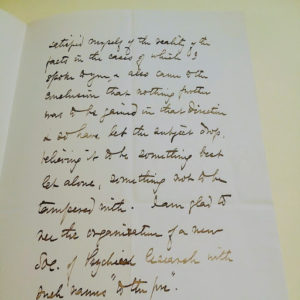 Meanwhile, once I had discovered the power of primary source material, I set about searching for other special collections. Over and over again, I was amazed by what I found, and astonished by the generosity of the curators who guided me on my journey.

The Portsmouth Athenaeum had not only letters, but some of Celia’s original paintings, photographs, and several pieces of the porcelain china she used to decorate and sell. The Harvard University Herbaria & Libraries proved me with journals and letters by Celia’s husband, Levi, and information about her son, Roland, who studied and taught botany at Harvard. Beyond that, Senior Curatorial Assistant Walter Kittredge gave me essential information about a particular plant that I wanted to use as one of the clues in the hidden garden. 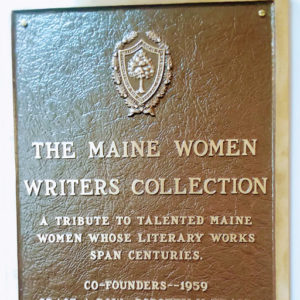 Colby College had a unique stash of correspondence between Celia and the writer Sarah Orne Jewett, among other things. And then, lo and behold, I discovered an entire library at the University of New England devoted just to women writers from Maine: The Maine Women Writers Collection. There, curator Cathleen Miller opened up boxes containing more of Celia’s letters, original copies of The Atlantic Monthly where Celia published her first poem, and a box that contained the most beautiful porcelain teacup I’d ever seen, painted and signed by Celia in 1879. (See photo above, along with the photo of a letter from Celia, also housed in The Maine Women Writers Collection.)

I sent the final revision of the novel off to my agent last week with a kiss for good luck. (Okay, I only blew the kiss at the laptop screen—back in the old days, I would have literally kissed the giant padded mailing envelope before sending it on its way.) Now I feel bereft, not only because the novel is gone and I’m no longer living in 1878, but because my passionate quest into curated library collections is over, and so is my treasure-hunter’s euphoria.

Unless, of course, I decide to pursue this next idea I have…