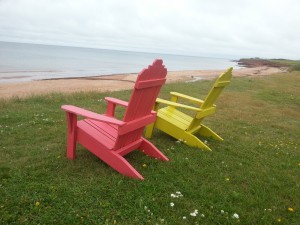 Before buying a house on Prince Edward Island, my husband and I rented places all over the island. Whether we were staying in Tignish or Fortune, Rustico Bay or Souris, though, we always spent time in Charlottetown. This historic city on the island’s south shore is known as the “birthplace of the Confederation” because it was here that, in 1864, a conference was held that led to Canada’s confederation. Today Charlottetown is a colorfully quirky mix of historic brick buildings, art galleries, shops, restaurants, and houses that range from dollhouse Victorians to glassy contemporaries overlooking the water.

With children in tow, I got to explore corners of the city that most tourists seldom visit, like the skateboard park, the huge indoor pool at the university, and The Comic Hunter, where my son competed in Magic card tournaments. No matter what we did, though, our visits to Charlottetown always included a stop at Cows Ice Cream on Peake’s Wharf. It was here that I found a magic sweater.

It was a chilly day in August. I’d forgotten my fleece and couldn’t bring myself to buy one of those tourist favorites, a :sweatshirt dyed orange-red using actual PEI clay. Somehow I’d already acquired two through the years.

So, when I walked by one of the shops at the wharf and spotted a sweater hand knit in gray tweed yarn, I bought it on the spot. It was the kind of sweater that seemed like it had been made just for me in the softest wool I’d ever worn. I wore that sweater every night for the rest of our stay.

This sweater represented everything Prince Edward Island meant to me: Freedom. Beauty. Comfort. Originality. Creativity. Because of this, it became my favorite garment to write in, especially if I were starting a new novel or working on a particularly tricky chapter.

As the years went by, of course I began to notice that my precious sweater was getting a little thin in the elbows. (Writers spend a lot of time resting our elbows on desks, usually when the words won’t come and we’re tearing our hair out.) I began to panic. What if my sweater wore out?

“You should buy another one,” a sensible friend suggested.

Of course! There was just one problem: the shop at Peake’s Wharf had changed hands and there were no sweaters like it for sale there anymore. How could I find another sweater as perfect as this one? Could I locate the woman who’d made it and beg her to knit me another?

Finally, it dawned on me to look at the tag inside the sweater. I knew the knitter’s name was in there on a small white tag—“Audrey Day”–and, because so many years had gone by, I thought it might be possible by now to Google her. (Yes, I bought this sweater before most people had home access to the Internet. That’s how old it is.)

To my shock, there, beneath Audrey’s name, was an actual phone number!

So, one day last winter when we were shoring ourselves against yet another blizzard here in Massachusetts and they were doing the same on Prince Edward Island, I called the number. It was for a residence in Summerside.

A woman answered. When I explained who I was looking for and why, she said I had the wrong number.

I apologized and prepared to say goodbye. But, because this was an islander I was talking to, this woman was determined to help me.

“I know an Audrey Day who knits,” she said. “She sells her sweaters at our Christmas church fair.” This woman—who happened to be a brewer of craft beer, another subject we covered in the course of our conversation–went on to tell me that, if I’d hold on just a second, she’d look up Audrey’s number for me in the Summerside phone book.

Lo and behold, just like that, I had another number to call. This time it was the right number, but Audrey’s husband answered. “Sure, Audrey knits sweaters and sells them here and there,” he told me, “but she’s out on a walk right now. Shouldn’t be too long, though, because it’s some cold out there and the snow’s coming down pretty good.”

That started a long conversation about the weather on the island—always a favorite topic. We also discussed the new roundabout in Summerside and whether that would be good or bad when the roads disappeared under the blowing snow.

“Is your wife really out walking in the blizzard?” I asked finally.

“Oh, sure,” he said. “Audrey walks no matter what the weather. But you call back in an hour and she’ll be glad to talk to you about her knitting.”

I did call back, and Audrey answered. Not only that, when I described the sweater, she identified it as one she’d made and sold along with a few others to the shop in Peake’s Wharf. “Of course, I don’t sell to them anymore,” she said. “That was a while ago.”

“So where do you sell your sweaters now?” I asked in desperation. “Could I buy another one?”

“Well, now, you just give me your measurements and tell me what you want, and I’ll make you one,” she declared. “I can have it for you to pick up in June when you come back to the island. Do you need one for a friend, too? Just as easy for me to make two as one.”

To me, a new knitter who had made only one sweater so far in her life at that time, a sweater would have best fit The Hunchback of Notre Dame, this seemed incredible. But I dutifully hung up the phone, took my measurements, and called Audrey back. When I gave them to her, she chortled.

“Oh, your husband is a lucky man,” she said. “You’re a nice solid island girl.”

I laughed. This was possibly the best compliment I’d ever received. I requested a sweater for my mother, too. Hers would be a brown tweed, mine a blue.

“How should I pay you?” I remembered to ask.

“Oh, don’t you worry about that. You just pay for the sweaters if you like them when you come up in June,” she assured me.

I insisted on sending her a check for half anyway. I knew, from screwing up various knitting projects, just how expensive good yarn can be.

By the time June rolled around, our six feet of snow had melted and sweaters were far from my mind. But I stopped in Summerside and, in a tiny complex of apartment buildings designed for seniors, I met Audrey and her husband. We had tea in their living room and talked about everything from the historic fox farms in Summerside to Prime Minister Stephen Harper. Then Audrey showed me her Mecca of a knitting room, with its treasures of yarn in every imaginable color and texture.

Finally, I met my new PEI sweater, a dreamy concoction in blue tweed, carefully packaged in plastic by Audrey Day. My mother’s sweater—which I planned to give her as a Christmas gift—was equally gorgeous, in a soft chocolate tweed.

As I drove away, Audrey stood on the steps and waved. “Toodle-loo!” she called. “Don’t be a stranger!”

How could I be, on Prince Edward Island?