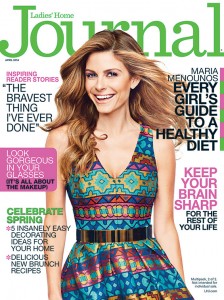 I never imagined that I would write for women’s magazines. After a few wrong turns into other careers, I started my writing life working on science articles for the public relations office of a medical center. I went on to earn an MFA in creative writing because I fantasized about writing novels for a living. (Go ahead and laugh). Before long, I was writing artsy short stories for literary journals that paid in copies, not cash.

This was fun, but I needed more money than the zero dollars I was making with my literary fiction. I began searching out freelance opportunities and found what you might expect: technical and marketing writing jobs. It never occurred to me that I could sell anything else, because literature, like crime, doesn’t usually pay.

There were only two places where I ever stumbled onto women’s magazines. With my young children in tow, I often went to visit my mother. She subscribed to several of them. I read her magazines in a lawn chair while my kids tumbled around on the yard. I also spent an unholy number of hours in pediatricians’ offices because my oldest son sprouted ear infections like dandelions in July, and thumbed through a lot of magazines in the waiting room.

In this way, I found amazing writers like Joyce Maynard, Elizabeth Berg, and Ann Hood. I loved reading their work because they were women like me, addressing topics that really spoke to where I was in my life.

In fact, it was an essay by Joyce Maynard about dating after divorce that prompted me to pick up my head and say, “I want to write something like this.” I was divorced by then, and scouting around for ways to make money without having to leave my children in day care for more hours than I could afford. I needed work that I could do at night while they slept.

So I wrote an essay. It was called “My Two Husbands,” and dealt with the amazing men in my life—my ex-husband, with whom I’d stayed friends, and my second husband, who seemed to enjoy my ex’s company—and how we had navigated an odd but workable extended family. I did what you did back then, and mailed the essay to an editor whose name I plucked off the masthead of Ladies’ Home Journal.

When the editor called to say she liked the essay and wanted to buy it, I was convinced it was a friend playing a trick. It wasn’t. In fact, the editor wanted to know if I had any other essays to show her.

I lied and said I did. Then I hurriedly wrote some.

And so my career as a freelance writer for women’s magazines was launched. In fact, it rocketed from there. Soon after my essays began appearing in LHJ, an editor from Parents called to see if I’d be interested in writing articles for them. Since then, I’ve written for over a dozen magazines on topics as varied as divorce, potty training, arson, psychotropic medication for children, exercise, vacationing with kids, blended families, you name it. I loved every piece I wrote—and still do.

At Ladies’ Home Journal, I discovered for the first time what a good editor can do for a writer, as Lorraine Glennon, in particular, helped me develop the thesis of each essay and hone the sentences until they were the perfect size and shape. I discovered that clarity is more important than imagery sometimes, but that the flip side is true as well: a good image can convey emotion on the page like nothing else. Before long, I was applying those lessons to my fiction. Eventually I did start publishing those novels I’d always dreamed of writing.

“Don’t you hate just hacking around as a magazine writer?” a writer friend—an erudite intellectual who teaches at a university—asked me one summer, as she spotted me editing a piece on the beach of our local pond.

I did. I do. I love the freedom of blogging, but I hope other magazines don’t go under as well. Never mind the fact that it’s harder than ever for writers to find paid journalism work. I hate not having an editor, and I despair when I think of younger generations of writers having to do without these keen eyes on their words. I also discovered through writing for magazines like Ladies’ Home Journal that millions of women rely on this medium not just for recipes and entertainment, but for information. Women who don’t necessarily have computers at home, live in New York City, or have supportive family networks or decent health care. At the hairdresser’s, at the dentist’s office, people were reading the words I wrote.

There is talk that Ladies’ Home Journal will be available as a quarterly publication and will also appear online. I hope so. Meanwhile, thank you, all of my editors at LHJ and other magazines, for teaching me to write.