Like most working parents, my life is so busy that half the time I feel like I’m greeting myself coming through the door as I cross off tasks on daily “to do” lists. So, when my husband and I found a century farmhouse on Prince Edward Island–priced at less than your average American car– we bought it as our escape hatch. This small island in the Canadian Maritimes is the one place where everyone in our family truly relaxes. Here’s what I love to do there, in no special order:

Our house is near the easternmost tip of PEI, far from the crowds in Cavendish. Yet I still feel the spirit of Lucy Maud Montgomery, the author of Anne of Green Gables, nudging me to take long, meditative walks on red dirt roads through the scrubby pines or flowering potato fields. There are views of shining blue and silver water in every direction, and dark red cliffs topped by cathedral spires of pine trees. 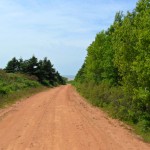 The road from our house to Bothwell Beach

2. Jump Off the “No Jumping” Bridge

One of my favorite PEI beaches is Basin Head. Yes, there are other people there (unlike most PEI beaches.) That’s a bit of a downside. But, ah, the bridge! At Basin Head—shortlisted as one of the Seven Wonders of Canada–there is a bridge over a river with a rapid current. Despite the “no jumping” signs posted, this is Canada, a place where people don’t generally tell others what to do. Instead, the lifeguards peacefully watch kids, teens, and adults flinging themselves off the bridge. The thrill lies not only in the jump, but in the rush of feeling like you’re being swept out to sea—to the Northumberland Strait, to be exact.

Nobody makes tea like they do in Canada. From that first Tim Horton’s stop over the border to the pots of steeped tea brewing in nearly any restaurant, I drink cup after cup of it. Canadians serve tea strong enough to strip the skin right off your tongue and make you feel invincible. The biscuits are like the ones my grandmother made, salty and puffy and just begging for a slab of that ADL butter with a dab of peach jam.

It’s a treasure hunt every day at the beaches on PEI, especially along the north side. We have a few favorite spots near our old house where we search for sea glass and porcelain shards. I’ve found bits of pottery and smooth-edged glass in colors ranging from white to turquoise, from amber to garnet. We’ve also discovered seal skeletons and shipwrecks, old lobster traps and buoys. 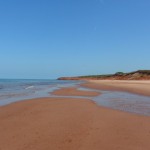 Mowing is a national sport in Canada—you often see people tooling about on their riding mowers even at dusk, headlights on, just to make sure they “get ‘er done” before dark.

Music—especially Celtic music—is hugely popular on the island. You can hear live bands any night of the week, usually for free, or for very little money. Our favorite places? Rock Barra, a musicians’ retreat on the north side of the island, where they hold jam sessions for established and new artists every Sunday night in the summer, and the Kaylee Hall at Poole’s Corner, where this past week I saw Richard Wood, the Mick Jagger of Canadian fiddlers.

7. Sit on My Deck and Watch the Neighbors

On PEI, I have neighbors who raise livestock and others who farm potato and grain fields. There are tractors and trucks of every description, and I watching them and listening to the sheep and cows in the fields while I sit on the Adirondack chair and write. The words flow easily here.