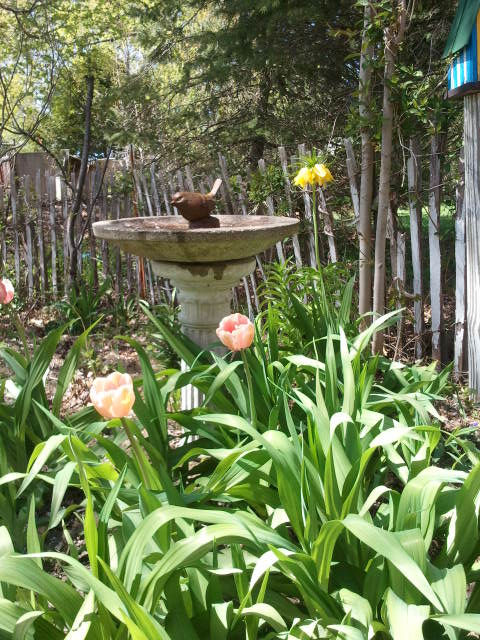 Seven years ago, my husband and I bought a house that we dubbed Big Red because everything about it was exactly that: Red siding, red shutters, red doors, red trim.

The house is a classic New England Colonial, circa 1790, and it had a classic New England couple living in it for nearly 70 years before we bought it. Larry and Ann were true Yankees, doing everything themselves. My own husband, Dan, is a lot like Larry. Tall, bespectacled engineers, these men are the sort who fix their own plumbing problems, wire their own houses, and always have piles of spare wood and metal “just in case.”

I, however, am nothing like Ann. Ann was a skilled seamstress – her curtains still hang in our family room – and she was highly regarded around town for her flower gardens. I don’t sew. I once tried to knit my husband a sweater, but it would have fit the Hunchback of Notre Dame, that’s how much bigger the back was than the front. And gardening has put me off since growing up on a Massachusetts farm where I had to help bale hay in the back fields, despite the fact that hay makes me sneeze and swell up like the Elephant Man.

My grandfather, who lived with us on the farm, was an avid gardener. Also a Yankee, he grew cabbages bigger than my head and flowers in neon colors. My mother’s favorite command to me was, “Go out there and help your poor grandfather before he keels over in the cabbages.”

I’d trudge up and down the dirt rows to do my grandfather’s bidding while he supervised, always wearing suspenders over his flannel shirts and smoking a pipe that smelled like cherries. He was a task master, commanding me to deadhead blossoms and pick up slugs, turn in compost and pluck dead leaves. I hated every minute of gardening and swore I’d never do it again.

So, when we bought this house, I focused my attention indoors. There was plenty to do those first two years: stripping wallpaper, plastering cracks in walls, painting, pulling up layers of shag carpeting and old linoleum, replacing bathroom tiles. Dan and I worked with our five children to make this house our own and ignored the yard altogether.

Ann’s garden grew increasingly overgrown as we finally exhausted ourselves in the house and turned our attention to the Civil War era barn out back. We intended to renovate the barn at least enough to get it to stand up straight. We devoted that third year to the barn, hiring contractors to do the foundation and roof repairs, then shingling the exterior ourselves. We also added a screened-in-porch to one side.

It was the porch that brought me face-to-face with Ann’s garden again. I stood on that porch and looked at Ann’s garden good and hard, despairing over the tangled vines, crooked trellis and broken fences. I couldn’t face it.
Days went by. I kept looking at the garden, watching it from my secret vantage point on the porch, as if something might come out from that green jungle and grab me.

Finally, something did: A small tree. I didn’t know what kind of tree it was; I only knew that I liked the shape of its bare branches, and that it was being choked by vines. I didn’t have to garden. But I could at least save that poor little tree.

To get to the tree required hacking a path through thigh-high brush. Some of the plants I recognized as things I’d seen in other gardens, but I had no idea what they were. Most were strangled with weeds; I imagined them reaching up their little stems for help as I waded through the mess to get to the tree. These vines were the stuff of nightmares, curled dozens of times around the branches. It took me nearly three hours to hack, trim, and yank them off the tree.

As I stood back to admire my handiwork, I stumbled on something hard. I looked down and parted the weeds around my knees. When I yanked up handfuls of plants, I discovered a small raised bed surrounded by stones.

How long would it take to free that flowerbed of weeds? After all, I was already here. I might as well just do it.
And that, of course, is how any addiction begins: You think you can stop any time, even as you get yourself drawn in deeper. Once I’d freed that first flower bed, I saw faint traces of more stones. I was like some mad dog that couldn’t stop digging. I had to follow the trail.

It was slow going. That summer, I managed to clear a single flower bed and two paths. This was back-breaking work; it took days with a pickax to chop away the topsoil and thick clumps of tall grass and myrtle that covered the paths. I got poison ivy and had to paint my arms and legs pink with Calamine lotion. Every night, I went to bed every night so sore that it felt like somebody had pelted me with stones. Now it seemed to me that my grandfather must have been some sort of magician, producing those gorgeous bouquets of gladioli and delphinium, tulips and roses as easily as if he’d pulled them out of his hat.

I learned to wear protective clothing in the garden – long gloves, tall boots, and a bandanna – an outfit that made me look like Johnny Depp in drunken pirate mode. My perfume of choice became bug repellent. I washed with a special oil to prevent another poison ivy mishap. My muscles grew stronger.

Slowly, Ann’s garden reappeared. The tree I had freed from the clinging vines turned out to be a Rose of Sharon with papery white blossoms. Secret flagstones emerged from beneath the topsoil that had accumulated on the garden paths. I pulled down the old fences and left only the trellis. Now the garden space was more inviting, yet still separate from the yard.

There was, I discovered, a sense of peaceful purpose in gardening. It felt like work but it was joy, too. Most people – especially my kids – steered clear of the garden, because every time they came near me, I barked at them to help me dump a wheelbarrow of this or haul a bucket of that. I was left blissfully alone with the worms and beetles, admiring the leaves that had so many different textures and shapes.

What the heck, I thought at the end of that third summer. Now that I had created some open space, it needed a few plants to become a real garden.

I drove to a garden center a few miles away. I had never been to one before. This proved to be yet another step down the road toward a serious addiction: Ooh, pretty plants! Tools! Statues! Bags of mysterious magical substances! I spent a fortune, only to discover that plants crowded into a car cover very little space in the ground.

A friend took pity. “Bulbs,” she said. “That’s the secret trick to an affordable garden. And ask everyone
you know to give you some plants for Mother’s Day. Don’t be afraid to divide your plants, either.”

The very next weekend, I went to the hardware store and bought netted bags of bulbs. I had no idea what I was doing, but I dug around in the dirt and haphazardly tossed in bulbs. The bags promised that these alien, oniony stones would one day become narcissus and irises, day lilies and daffodils. It was the same rush of adrenaline as buying lottery tickets, only more work.

The third winter went by. A cold one, lots of snow. I forgot all about my garden/archeology project out back. I moved my efforts indoors, where I painted another bedroom, had curtains made for the dining room.

Early this spring, I wandered outside with a bucket of compost from the kitchen and discovered that I’d won the lottery: My first bunch of daffodils had bloomed like a row of little yellow suns. I dropped the compost bucket and ran over to greet them by name, forgetting how I’d promised my husband that I’d never become one of those crazy women who talks to plants.

Dan caught me at it. “You’ve almost got a garden here,” he said, laughing. “I never thought you’d stick with it.”

Stick with it? I couldn’t quit now! I watched those daffodils like they were rare orchids in the Royal Botanical Gardens. Tulips and irises soon joined them.

This summer, I began hoeing more overgrown beds and found rocks that looked as though they’d been imported from other places. But how? And why?

“Larry and Ann must have traveled,” Dan said, examining one smooth black stone with me. “This is some kind of volcanic rock. Maybe Hawaii?”

The rocks were souvenirs, I realized, carefully placing the black rock in a corner of the garden bed near the daffodils. The former owner, Ann, had been married to her husband for sixty years. They’d raised children together and she had buried him before leaving this house to live in a nursing home. I glanced over at my husband and wondered if we’d be here in our eighties, too, fixing shingles and separating lilies, trimming bushes and feeding roses until death parted us from one another.

Ann had earmarked her travels with Larry by bringing rocks back from their various vacations. My grandparents had done the same thing until my grandfather died in his seventies. I went on a serious search, then, and discovered more stones that didn’t belong, many of them smooth with age. I placed them carefully along the edges of the garden beds and used them as markers to help me remember where I’d seeded certain plants.

The next time I went to visit my brother in upstate New York, I brought back a rock to add to the garden. Another time, I brought driftwood from a trip I took to Prince Edward Island and laid it out around the base of my Rose of Sharon like bleached white bones. As Ann’s garden became my own, I began to understand the passion that we humans have for transforming the earth with our bare hands, not to grow food, but to hold our memories. This is our way of putting ourselves into the earth.

Right now, my garden has roses in bloom, as well as delphiniums, dahlias and lilies. A serene looking Buddha statue that my husband gave me for our wedding anniversary sits beneath a hydrangea – a tiny bush of twigs when I bought it, now lush and knee-high. I’m going to bring back another rock when I visit my cousins in Ohio soon. Meanwhile, Dan is helping me lay landscaper’s cloth and my youngest son is dumping wheelbarrows of stone along the paths.

“This is hard work, Mom,” my son complained recently as he shoveled stones and raked them out.

“It is,” I agreed. I bent down to pull a handful of violets from between the lilies, digging deep in the sun-warmed soil.