Seeing your book cover for the first time is like waiting for that guy from Match.com to show up at the restaurant. You’ve laid out your expectations and supposedly so has he. But will he actually look like the date of your dreams?

We all hope for stunning, even sexy covers—covers as startling as the ones profiled in this great article, “The 15 Sexiest Book Covers of All Time,” on Flavorwire. We hope for covers that are great art, so people want to leave our books lying around on the coffee table. However, as someone with experience in both indie and traditional publishing, as well as in love (I’ve been married twice, and kissed a lot of frogs between marriages), I can offer this advice when you’re choosing your book cover:

1. You really should be able to judge your book by its cover
2. Just like love, sometimes a book cover can grow on you, so don’t make up your mind too fast.

My first book was a memoir called The Gerbil Farmer’s Daughter. (Yes, it’s a memoir: My dad was a gerbil farmer who had three barns filled with 9,000 gerbils..) It was published by a division of Random House with the paperback cover you see on my web site.

This wasn’t the original cover. The original hardcover was fun and campy, a pair of green boots with a gerbil popping out of one of them. I loved that cover because it definitely told the story, I own a pair of green boots, and lots of people don’t know what gerbils are. (Despite my father’s efforts, most kids still have hamsters.)

Why did the publisher’s marketing team change the cover?

Easy. According to my editor, “A lot of women don’t love rodents.” They wanted to capture women’s book clubs and they were aiming to get the book into Target. The focus groups all wanted bright colors and sweet, joyful covers. Hence the little girl (who definitely isn’t me) running up that hill of flower-laden trees.

“But this has nothing to do with the book,” I complained.

It doesn’t matter, everyone said. “We’re conveying the spirit of the memoir, and it’s a quirky, happy family story.”

Eventually, I got used to the new look of my book. I even started to admire the little girl’s absurd spotted playsuit. I could imagine myself in that outfit, charging through an orchard, chasing my brother (or, more likely, being chased by him). And the publicity team was right: the book sold well with its new cover and the book landed on the shelves of Target stores everywhere.

The next book I published, Sleeping Tigers, was a novel. Because I was self-publishing, this time I had complete design control but a very limited budget. I gave the designer my basic idea—that I wanted a book that felt something like Eat, Pray, Love, because this novel featured a woman traveling to Nepal to bring home her wayward brother and discovering herself in the process—and included some photos. I was given two choices. One featured a sexy, sleeping woman with the faint image of a tiger superimposed. The other was the cover you see here on my web site, with a woman’s hand turning the prayer wheel at a Buddhist temple.

I had a tough time choosing between these two covers, but I had to go with one of them because I was out of money. Sleeping Tigers isn’t a romance novel, but there’s a romantic element woven into the plot and the romance market is still going strong. There is a scene in the novel where the main character, referring to her own health crisis, says we all carry a “sleeping tiger” inside us. Perhaps the gorgeous, sleeping, kissable-looking woman with the tiger would be the best choice for cover art.

My daughter finally helped me make up my mind. “I would be so embarrassed to hold a book with that cover showing the sleeping woman, Mom,” she said. “She definitely looks like somebody who should be on reality TV.”

Two weeks after self-publishing Sleeping Tigers, I had the good fortune to sell my new novel, The Wishing Hill. It will be published by NAL/Penguin on July 2, 2013, and I recently received the cover. Here it is: 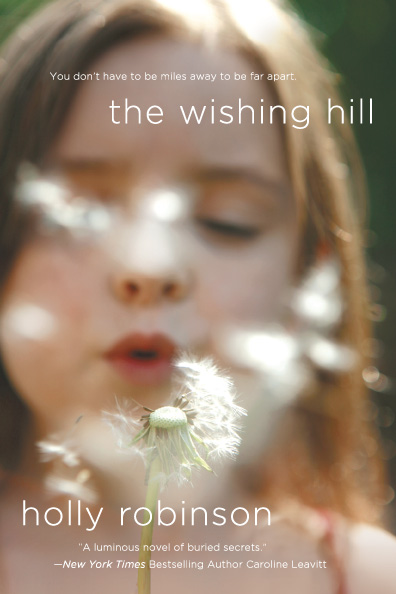 When I first saw the cover, I was taken by surprise. This is a novel about a woman painter living in Mexico who is called home to New England to help take care of her mother, an aging and self-absorbed actress. When she does, she soon discovers that her family relationships aren’t at all what she thought they were—and begins the process of uncovering the truth about her family and herself. I had expected to see a woman on the cover, at the very least, or perhaps an easel and some paints, or a scene of Mexico or New England.

Instead, here was this little girl, blowing dandelions and making wishes. This is a key scene in the book—there is literally a scene where the main character, Juliet, is doing this with her mother and aunt—but did I really want another book cover with a little girl on it?

“It looks like a children’s book,” my mom said dubiously.

Since these two people are among my top literary critics, I panicked. So I did what any self-respecting writer does: I immediately sent out the cover to about a dozen of my best writer friends.

Only one of them didn’t like the cover. The rest were thrilled, using words like “beautiful,” “dreamy,” “sweet,” and “hopeful.”

So I looked at the cover again. By now, I had the tag line and a quote on the cover as well, and what I realized was that the book didn’t look at all like a children’s book. It looks like what it is: a novel about a family’s buried secrets, a child’s wishes, and that powerful desire we all have to live happy, hopeful, loving lives.
So I said yes to the cover, and now I’m totally in love with it.

Tell me your own experiences in designing your book covers! I’d love to hear about the ones that worked—and the ones that failed—and why.