As news of the school shooting in Newtown, CT unfolded, I was sad, of course, but I tried to keep rationalizing it. “These things happen,” I said. “We live in a violent world and Adam Lanza was a troubled soul.”

Why focus so much attention on this one tragic incident, when in fact children die every day, all around the world, from malnutrition and neglect, abuse and war? Besides, I had Christmas shopping left to finish and time was running out.

Turns out, the incident hasn’t been easy to shake. Not for me and not, I suspect, for most of us. In my case, the fact that these were young children learning their letters, being taught by teachers and a principal who literally gave their lives trying to save their young charges, hit me hard. I have five children and I’ve been a teacher. Images of classrooms and lunchrooms, hallways and even the principal’s office have been imprinted on me for the past 20 years. In my mind, I could imagine the events unfolding all too clearly. My children could have been—could still be—gunned down in school, on a college campus, or hell, walking across a street at the wrong time, like a friend of ours who was recently murdered in Baltimore on his way home from choir practice, or like my daughter, whose car took a bullet when she drove down the wrong city street at the wrong time of night.

What message could I possibly take from Sandy Hook, except one of anger and despair? Anger, because no matter how many times this has happened in our country, people can still easily buy weapons and ammunition of the sort nobody should use outside of war, and despair because innocent people are murdered every day as a result of this nation’s love affair with guns.

But it turns out that there is a very different message to take away, a message of hope. This is what hope looks like: A delegation of students who survived the 2005 school shootings on the Red Lake Indian Reservation in Minnesota making their way to Newtown, Connecticut, to comfort the grieving community of Sandy Hook Elementary School. The former Red Lake students are now in their 20’s, and they drove 1,500 miles to carry the message that life can, and must, go on, and that there is joy even after your darkest hours. 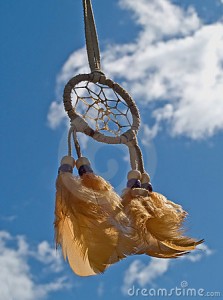 “We know exactly what those kids and families are going through,” Leah Cook, who was 16 at the time, told an AP reporter. Cook, who still has a mark where a bullet grazed her leg as she fled her classroom, added, “We want to share with them what we went through and show them that there’s hope and let them know they’re not alone.”

What gave the Red Hook students the idea that they could, and should, make this trip? They were doing what Columbine High School students did for them, after they survived their own school shooting in 1999. When the Red Lake delegation went to Newtown, they met with Sandy Hook Elementary School families and teachers with a dream catcher, tribal flags signed by kids from their school, and a memorial plaque that the Columbine students had given the Red Lake students in 2005, with the understanding that they would pass it on if there were ever another school shooting.

Where there is despair, there is hope, if we can come together to grieve, to comfort one another, and to shine light into our darkest corners. My message? Reach out and comfort someone today. Spread hope, and there will be less room in this world for darkness.