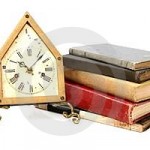 Most of us become novelists because we don’t envision moments. We envision worlds.

Novelists must fully inhabit those worlds to write about them. We don’t just need to know what our characters are doing right now. We must understand who these people were before facing the conflicts we throw their way. But that doesn’t mean our readers have to suffer through reams of back story or flashbacks (the events that happened before your novel opens). In fact, the less back story you have, the better your novel will flow.

This doesn’t mean skimping on character development. Even if you’re writing a plot-driven mystery or an engineer’s wet dream of a science fiction book, you want your characters to develop beyond the paper doll stage. You know their eye colors, the way they walk, the slang they use, and their favorite cocktails. If you’re clever, you’ll even give your bad guys a few good qualities and your heroes some flaws to keep things real and 3D.

As the creator of these characters, you will probably write their histories into your novel:

“Jeanine had grown up in a small house just south of Toledo, Ohio, where her father was a policeman and her mother stayed home and pretended to take care of them, when really what she mostly did was play tennis and bridge. Jeanine loved school but ultimately chose not to go to college, because she got more interested in cooking instead. She had always been afraid of the dark because, when she was little, her older brother, who also became a cop, used to hide in her closet and routinely leap out and spook her, sometimes flicking her with a wet towel to make her cry. Now she carried pepper spray with her even to the dentist, only a block away.”

By the second draft of your novel, though, you need to question every single flashback. Can you convey the same qualities about your characters without asking the reader to slog through something that happened in the past? If you can, great. Ditch the back story!

If there is a detail in a flashback that you really want to get across—say, for instance, it’s crucial that the reader knows Jeanine carries pepper spray—try conveying it either through dialogue or in a more active way. Maybe Jeanine could drop her purse on a date, and when the pepper spray rolls onto the sidewalk, she might hurriedly tuck it back into her purse and say, “When you grow up with an older brother like I did, you learn to be a survivor.”

The reader gets it—and will be curious to know more about Jeanine’s qualities as a survivor.

As a ghost writer and book doctor, the mistake I most often see in manuscripts is “front loading.” By this, I mean the flashbacks are all up front, usually because the writer has written them to understand her own material. She loads the manuscript with sticky back story in the first few chapters, clogging the flow of the book, and doesn’t ever get around to revising or being more selective (possibly because she’s panicking about word count). This kills reader suspense (yes, even in a novel that isn’t a mystery) and brings the plot pace down to a crawl.

If you really love the flashback, trim it and save some juice for later. Let’s think about this scene:

“Every time Frank walked into Leslie’s house to pick up the kids, he was struck by the echoing sounds of his own footsteps in the foyer, which looked as grand as a Cadillac showroom but always reminded him of the time he’d arrived to find Leslie in the arms of Henry Simmons, the tenured Botany professor at Clark College whose main claim to fame was having a species of lichen named after him in the Arctic. Since then, Frank had imagined the foyer stank of reindeer and tundra. Leslie had fallen for Henry, he supposed, because she was menopausal and couldn’t ever seem to regulate her own body temperature, until she found a man icy enough to suit her. Henry had wooed her with chocolates, wine, and a tiny desk fan Leslie could use whenever a hot flash suffused her body. Now she was eager to rush down the aisle with Simmons, whose voice sounded like a cross between a grizzly bear’s roar and a chain saw’s whine. Frank couldn’t get out of the house fast enough.”

That’s a lot of information to throw at the reader, especially if it’s in the first chapter. Maybe it could be trimmed to this: “Every time Frank walked into Leslie’s house to pick up the kids, he was struck by the echoing sounds of his own footsteps in the grand foyer and imagined the stink of reindeer and tundra. How was it possible that Leslie had fallen for a guy whose claim to fame was having a species of lichen named after him in the Arctic? He blamed it on menopause.”

The rest of the details, including the name of Leslie’s lover and how Frank discovered them together, could be dropped into the novel as needed. Perhaps when Henry Simmons makes an appearance in Chapter 4, Frank could hear the man’s chain saw whine and imagine creative ways to silence his nemesis.

Keep the back story sparse and sprinkle it throughout your book instead of front loading. That way, your narrative tension will be tight instead of slack, and your reader will be drawn forward by wanting to know the story behind the story—which is why we all escape into books in the first place.