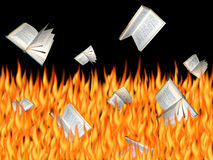 There is always a point, about 250 pages into writing a novel, where I want to set fire to it.

I have done that in the past. Twice. Thankfully, by now I’ve learned that the whole point of writing a first draft is to get it on the page so you can fix it.

Here’s what happens: I write a synopsis for each of my novels because my editor asks for one.  A pitch is tough to write—even a Stephen King or Virginia Woolf novel would sound ridiculous and implausible, boiled down to ten pages—but, once I have it, I understand the point of the book. Then all I have to do is write it.

I keep thinking that this process should be easier for me now that I’ve written nine novels and am about to publish my fourth. (Yes, if you’re counting, I have scrapped five novels, two of them into blazing fires.) But it isn’t easier at all, and I can tell you why: even with a synopsis, you have to feel your way blindly through a book.

Sure, you know the characters and major plot points. But how do you get from one plot point to another? What do the characters’ voices sound like? How many points of view should you use? Those are all questions that take a while to answer.

A first draft feels—and often looks—like I’ve upchucked onto the page. (Sorry to all of you out there with delicate stomachs.) There are chunky adverbs and stringy sentences, unsavory images and chronological spills. Even worse, there are often entire chapters that you have to mop up and toss.

Take the novel I’m writing now. At first I had four points of view. Then, after 200 pages, I realized that I needed to scrap one of them because it was robbing the book of its tension. Just yesterday, I also saw that I have to restart the book at a different point, because the way I’ve begun it now is just plain boring.

Yep. I said “boring.” That’s where I came very close to setting the manuscript on fire.

And then, partly during a phone conversation with a friend, partly while I was walking the dog, and partly while I was standing in the shower, I thought of two new plot points AND a different way to start the book. I was practically rubbing my hands together with glee when I sat down to write this morning—only to discover that there was a reason I couldn’t use THAT beginning, because too much would be revealed too soon.

Crap. Back to the drawing board. See how much fun it is to write a novel?

I am telling you this because, when I began writing fiction, I eagerly waited as my agent sent my first novel to, oh, about twelve editors. All twelve rejected it, but three of those editors suggested a rewrite. And you know what?

I didn’t do the rewrite. Impatiently, I simply began another book. A better book, I thought. And maybe it was. But that novel, too, got rejected. So I started a third.

I should have rewritten that first novel, because the real magic in every book happens during revision. You need to get that messy first draft done so you can play with it, trim it, shape it, or even turn it inside out. And that can take as much time, or more, than blowing through that exhilarating first draft.

So take another look at that book you’re about to toss. Try it from another point of view. Start the book with a middle chapter instead of the one you’ve got now. Break up the chapters in a different way. Chop up the writing or expand it. Play, and let yourself be surprised.

You might have the book you want to write in front of you. You just can’t see it yet.