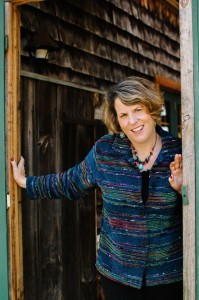 Novelist, journalist and ghost writer Holly Robinson is the author of The Gerbil farmer’s Daughter: A Memoir and six novels: Sleeping Tigers, The Wishing Hill, Beach Plum Island, Haven Lake, Chance Harbor and Folly Cove. Her articles and essays have appeared in dozens of national publications. She and her husband have five children and a stubborn Pekingese. They currently divide their time between Massachusetts and Prince Edward Island, and are crazy enough to be fixing up old houses one shingle at a time in both places.

I never meant to be a writer.  I studied biology in college because I either wanted to be a veterinarian or a doctor – preferably one of those doctors who’s always jetting off to villages in Africa or Tibet to save thousands of lives while wearing one of those khaki vests that’s mostly pockets.  But life intervened during my last semester of college, when I had to take one more elective and I chose a class in creative writing with a professor who started out by telling us that writers are born, not made.

I believed him.  I was sure that I couldn’t have been born to be a writer, because I’d never imagined myself as one.  In fact, I had never even met a writer.  The only thing I knew about most famous writers was that they were unhappy, drank themselves into oblivion and eventually stuck their heads in ovens, shot themselves, or got run over by streetcars.  Who would want to be a writer, if that’s what happened to you?

Yet, from the moment I sat down to write, I became completely absorbed in my work.  Unlike my clock-watching sessions trying to learn physiology or organic chemistry, whenever I was writing seven hours could pass like seven minutes.  To the horror of my parents, I abandoned the idea of medical school.  I promised them that, if I didn’t get to be rich or famous (preferably both) in one year,  I would let common sense rule and find a real career, something that required an advanced degree and letters after my name.  Something with a steady paycheck.

Of course, none of that happened.  A year went by.  Two.  Three.  As I became even more engrossed in the writing process, I did what all writers do to support my secret habit:  I worked a thousand odd jobs, from proofreading telephone books (really) to construction.  Along the way I earned an MFA in creative writing at the University of Massachusetts in Amherst.  Some of my classmates there were talented, even brilliant writers, but not all of them became successful.  In fact, as I look back on it now, I realize that the most successful writers to emerge from my program were the ones who were scarcely noticed at the time.  They weren’t necessarily the flashy ones at parties or the award winners.  They certainly weren’t the ones who sat around in pubs chatting about the cabins they would build in the woods with the advances from their first novels.  No, the success stories were the hard workers, the writers who spent a lot of time alone, churning out rewrites and new pages every week.

After finishing my MFA, I meandered into journalism, marketing, and teaching jobs.  Most were enjoyable, but none were as deeply satisfying as writing on my own.  I kept at it, filling up the corners of my life and lots of paper with words and more words.  Every now and then I sent something out and got rejected.

I got married, had children, got divorced, got remarried, had another child.  I worked, too.  All of that took time.  A lot of time.  Still, I kept writing:  at night after the kids were asleep, on weekends at the playground while my kids were eating sand.  Years slipped by with nothing published other than a couple of literary stories and a few newspaper articles, but I was happy.  Writing for me had become  an escape, not away from my life, but into myself, in a life where family responsibilities and work deadlines tried to jimmy themselves into every free minute.

And then a funny thing happened:  as I navigated the strange process of getting divorced and getting married again, all while trying to stay friends with my ex-husband, I read an essay by Joyce Maynard in Redbook magazine about being a single mom.  And I thought:  Hey.  I’d like to write something like that.  So I did, in response to a literary contest.

To my surprise, I won an award in the contest.  This gave me the courage to pluck the name of an editor off the masthead of Ladies’ Home Journal magazine — something the writers’ guides tell you never to do – and send it to her.  The editor bought it.

I found an agent and began selling articles, essays, and advice columns to a variety of national magazines. The editors at those magazines were tougher on me than any professor of writing could ever be, teaching me how to research, interview, write and rewrite until a story gleamed.  I wouldn’t be where I am now without their collective help, support and advice.

One day, as I was driving home from the grocery store, a title floated across the windshield of my car: The Gerbil Farmer’s Daughter.  After I finished laughing, my mouth went dry.  I had the germ of my first book.

I knew nothing about writing nonfiction books, so naturally I went to my local library.  I found several books that told me how to put together a nonfiction proposal.  Again, nobody was more surprised than I was when my agent actually sold the book the basis of that proposal. Since then, I have gone on to sell novels and become a ghost writer for other people’s books–everything from celebrity memoirs to science and psychology books.

So, whether your dream is to write books or raise gerbils, never mind whether you were born to do it.  Your success will be determined by your own passion and persistence.  We each find our own paths.  Believe in yourself and put in the hours.  The rest will follow.