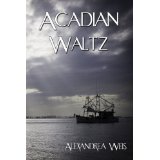 Looking for a steamy romance to take your mind off the lingering snow on the ground?  Check out Acadian Waltz by award-winning New Orleans author Alexandrea Weis, who was kind enough to stop by my blog today to share some of her writing secrets.

What inspired you to become a writer?

It’s not so much that I was inspired, but something I had to do. I began writing at eight with poems, and by high school I was known by everyone as “the writer.” I never decided to be a writer; it was always just something I did. That I have turned it into a career still amazes me.

What gave you the original story idea for Acadian Walz?

I was raised by a Cajun family and, of course, being from New Orleans I have always been influenced by the Cajun culture. For me a story about love, Cajuns, and bit of the dark side of the city seemed to be a great story.

How did you eventually settle on these characters and points of view?

I never settle on characters or a point of view, I just write. I begin with an idea, and go from there. I wish I could say I am very organized and have detailed outlines, but I don’t. I simply start writing and see where the story takes me. The characters develop as I write them, and by the end of the book, I know who they are, and usually go back and fill in more details during rewrites. I like to say the story comes alive as I write it.

What role does the setting play in the story?

I think a great deal. The setting will influence how the characters talk, interact with each other, and depending on the setting, add a unique essence to he story. People are a reflection of where they live, and I try to incorporate aspect that in my novels.

Tell us a little about your writing habits. Do you have a special place you write, or special rituals to avoid writer’s block?

I don’t have any special rituals, and the place I write is at my computer in my bedroom. To avoid writer’s block, I keep writing. When I need to and figure out a story, driving helps. Don’t ask me why, but going for a drive helps put it all in perspective for me.

What advice do you like to give new writers?

Write! No matter what other people say, no matter how many rejection letters you get, no matter how many times you tell yourself you are terrible at it, if you need to do it to stay sane, then keep writing. The more you write, the better you will get.

What do you love best about being a writer?

I feel at my best when I write, as if I am using all of my brain and not half of it. As for being a writer, it is not something I set out to do, figuring I would love the lifestyle or some such thing. Being a writer is a lonely, frustrating, agonizing, and exhausting job, but then again, I can’t see myself doing anything else. Do I love it? I love when I finish a book and like what I have done. That is rewarding.

Is there anything you’re working on now that you’d like to tell us about?

I am finishing up the edits on my next book, The Satyr’s Curse. It’s a supernatural love story about a man cursed so that “no woman can satisfy his lust, and no wine can quench his thirst”, and is set for release May 1st. I have several more books coming out in the future, so I am always either writing a new book, or editing one about to be released. I like to stay busy.

Book Description:
At thirty, Nora Kehoe is feeling pressured to settle down. On a blind date, Nora unexpectedly ends up in the emergency room where she meets Dr. John Blessing. She hopes the pragmatic Dr. Blessing can make her life complete.
Then, a passionate encounter with a childhood friend changes everything. The charismatic Jean Marc Gaspard manages the family business, Gaspard Fisheries. But rumors abound that Jean Marc is running more than seafood through the waters around Manchac Louisiana. When a family crisis sends Nora to Manchac, she is thrown headlong into the dangerous world of smugglers and swindlers. And as Jean Marc tries to protect Nora from his past, he realizes he may lose her because of it. The dark bayou waters run deep with secrets in Louisiana, and every Cajun knows how to dance the fine line between the right and wrong side of the law. But for strangers, learning the steps to staying alive in the swamps can be tricky. Life, and love, will be dependent on how well one can master the … Acadian Waltz.
About Alexandrea Weis:
Alexandrea Weis is a registered nurse from New Orleans who has been writing novels and screenplays for over twenty years. Her first novel, To My Senses, was a finalist for commercial fiction in Eric Hofer Book Awards, a finalist for romance in the Foreword Magazine Book of the Year awards, and a finalist for romance in the USA Book Awards. Her second novel, Recovery, was ranked #1 on the Amazon top rated for romantic suspense in kindle books. Buyer Group International, an independent production company in Austin, has optioned the motion picture rights for Recovery. Ms. Weis is also a permitted wildlife rehabber with the Louisiana Wildlife and Fisheries and when she is not writing, Ms. Weis is rescuing orphaned and injured wildlife. She lives outside of New Orleans with her husband and a menagerie of pets.