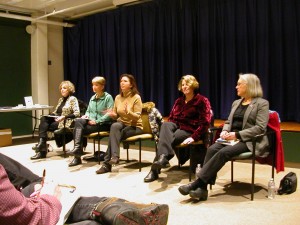 Every month, I join Nevertheless Writers, a cross-genre group of five writers, to discuss writing and publishing at local libraries and schools. My favorite part of the evening is always the question-and-answer session, where everyone from teenaged writers of fantasy novels to aging hipster poets chime in with questions and information.

Last night, one question provoked so much discussion that I thought I’d share it here: “What were your biggest mistakes along the way to publication?”

I made so many mistakes along the way that I thought I’d offer a roundup of them to help aspiring writers avoid stumbling into the same muddy potholes that nearly swallowed me whole:

Don’t Pass Up Opportunities. One of the writers on our panel, middle grade author Elizabeth Atkinson, tells a great story about a contest she entered to give herself a deadline for finishing a manuscript. That contest didn’t lead to publication, but it helped her find an agent because one of the judges happened to be an editor at a publishing house, and she wrote a note saying she’d like to see the book again if Elizabeth revised it. Another member of Nevertheless Writers, mystery writer Edith Maxwell, also found an agent through a contest. I entered an essay writing contest and, although I only earned honorable mention, that gave me the confidence to start submitting essays to national magazines. Eventually an editor bought one of them, and that opened the door to my career as a magazine writer. Now I wonder what would have happened if I’d been entering different contests—maybe, say, contests for first novels? Would I have been publishing my fiction sooner? My point is this: opportunities are everywhere. Check out Poets & Writers and other magazines for contest announcements. Even some publishing companies sponsor them. You might think, “Oh, I’ll never win that,” or, “That deadline is too tight for me.” But how do you really know you won’t win? What would happen if you did? I’ll tell you what would happen: you’d start building a solid portfolio that could eventually lead to an agent and bigger publications. The message: If you see an opportunity, grab it.

If An Editor Shows Interest, Follow Up. When I sent my first novel around, I received several editorial letters from editors who thought my work showed promise. All said basically the same thing to my agent: “If she decides to revise this novel, please send it to me again.” Now, did I revise that novel and resend it? Unlike my wiser friend Elizabeth, I did not. I was too inexperienced back then to know that, when you’re writing, the real magic happens during the revision process. That particular novel is still sitting in a file cabinet in my office. Looking back, I wish I’d had the chops to dig back into it and resend it to the same editors to prove that I had the staying power to work on a manuscript until it was ready for publication.

Don’t Listen to People Who Make You Cry. I majored in biology and was headed to medical school until I took a creative writing class senior year and decided to become a writer instead of a doctor. (Oh yeah, baby. My parents were thrilled.) I had no foundation in literature, so I went to graduate school for a Master’s in Fine Arts in creative writing to get one. One of my teachers there—a revered, award-winning fiction writer—made me cry when he told me my writing “has the depth of a television commercial.” What he was seeing in me was something I only realized later: I love writing commercial fiction, specifically, emotional family mysteries. That particular literary lion didn’t think much of that kind of writing, and it took me years of wrestling my way through writing literary novels (that still remain unsold) before I realized, hey, I don’t like to read this stuff, really. Why would I write it? I needed to be true to my own voice.

Avoid Nesting. I can’t tell you how many people have come up to me at these events and talk about the novels or memoirs they’ve been working on for years. Or even decades. Yes, the magic happens in the revision, but at a certain point, you have to let your work go out in the world and be judged. For one thing, that’s the only way you’ll get real feedback. For another, if you do land an editor at a publishing house, that editor will probably have you revise the book anyway. Or, if you’re self-publishing, your readers will probably be reading for the story more than anything, and if they like your story, they will forgive small imperfections.

Don’t Hide in Your Hermit Crab Shell. Yes, writing is a solitary act and requires hours of alone time. You can’t really write a good book while you’re having conversation with someone else. In fact, I find it difficult to live the writerly cafe life simply because I get too distracted by all of the people and start eavesdropping. At the same time, it’s a mistake to think that writers work completely alone. If you can find a good writing workshop—either through a library, a bookstore, or by taking a class—that will give you deadlines for you work (very important, if you’re going to avoid nesting), and, even more importantly, a community where you can share everything from rejections to information about agents or book marketing. Besides, if you don’t get out and live life a little, what will you have to write about?