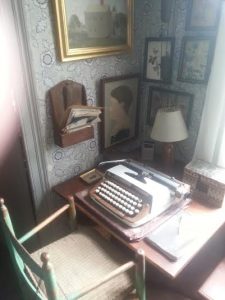 If you eavesdrop on a conversation between writers, it’s easy to mistake talk about craft for something else. Marathons, maybe.

What are these writers despairing or gloating over? Word count. Some authors—particularly those high-stepping their way through a fantasy, romance, or mystery series—count words every day as a way of meeting their deadlines.

Other novelists linger, polishing each sentence to a high gleam rather than steamrolling through plot. What does it matter how many words you produce, they ask, unless they’re the best words?

I have mixed feelings. When I first began writing novels, it didn’t matter to me how many words I produced, as long as the story in my head continued to spin out on the page. It took me a long time to write each of those early novels. Years.

After I sold my first novel to Penguin, however, things sped up. The publisher gave me a year to write each book. I happily wrote the next four novels at a breakneck pace to meet my deadlines. That’s when I discovered the usefulness of word count: if I calculated how many words I needed and divided that by the number of days I had, I could reassure myself that I’d finish in time. If I missed a day of writing for some reason, I made up for it, even if it meant binge-writing through a weekend. It was kind of like dieting, only in reverse: 100 extra calories here can be burned off by depriving yourself of a piece of toast the next morning.

Once I was in the zone, writing at that speed was pretty easy. There were even advantages: I was always in the heads of my characters. However, occasionally I felt breathless and unmoored, even unhappy. I wanted to fix certain things but didn’t have time. To meet my deadlines, I had to keep moving forward and piling up stacks of words.

Then something happened that was totally out of control: my beloved editor at Penguin had to take a leave because of personal reasons. Another wonderful editor stepped in to usher my new novel, Folly Cove, to print in October 2016.

But I don’t have a contract for another book.

My first impulse was to hurriedly put together a synopsis to show the new editor. I might have done that, too, except there was this other book I’d been thinking about—a novel different from the ones I’ve done before. Even though I believe the same sorts of readers who typically buy my books would love this new novel, I have no idea whether I can pull this book off. I knew I needed to figure things out—more slowly.

Given my recent history of writing novels only under contract, it’s scary to just write whatever I want, like performing trapeze tricks without a net. But it’s also liberating.

At the moment, the words belong only to me. Writing this way is as liberating as it is terrifying. Later, I’ll show it to my friends, and then to my agent, but right now I’m feeling my way through a secret underground tunnel each time I enter the world of this new book. It’s a place where only I can play with the colors and shapes, and magical things are happening.

Or maybe the book is crap. I really don’t know. However, one way or another, I’ve decided to impose a personal deadline of late autumn. Thanksgiving, maybe. Otherwise it’s too easy to keep going down rabbit holes in this tunnel for the fun of it.

So now I’m back to counting words, only there’s a difference: I know that, if I write 2000 words on any given day, I’ll probably throw 500 of them out. Or even 1800. I want these sentences to shine. However, tracking the words keeps me a little bit more honest, and a lot more on schedule. What’s even better is that one of my best friends, Maddie Dawson, is also writing a new novel. She and I have agreed to swap our word counts, sort of like Weight Watchers weigh-ins, only we can eat as much as we want.

If you’re curious, here’s my word count over the past month. You can see that some days are better than others. There are entire days, and even a one-week gap, where I did no writing at all. The important thing is that the word count gives me proof that the book is moving forward, one sentence at a time:

Here’s where Maddie and I decided to swap word counts:

What about you? Do you or don’t you? I’d love to know!