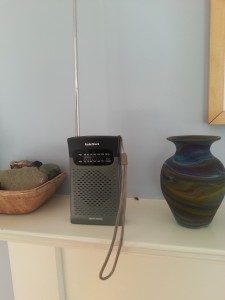 My husband and kids always know where I am by following the sound of my radio. I listen to it when I’m folding laundry, putting on makeup, washing dishes, knitting, soaking in the tub, or scrubbing the bathroom.

I don’t have a fancy radio. Far from it: mine is a plastic, battery-operated transistor radio similar to the one my grandmother, who lived to be nearly a century old, used to carry between her kitchen and bedroom, most often tuning into cranky AM talk radio shows. That radio was Grammy’s lifeline to the world.

Similarly, radio has saved my life, or at least kept me sane during some complicated times. I bought my first radio with babysitting money the year I started middle school. It was pink and white, received AM and FM stations, and was small enough to sit on my nightstand. I blasted pop music from its tinny speakers; that music got me through first crushes and heartbreaks.

In high school, I traveled to Argentina as an exchange student; I left my pink radio behind but inherited another cheap transistor from my host family. I suffered from culture shock and discovered BBC broadcasts in my desperate attempts to hear some English. After a month or so, though, I began listening to Spanish stations to practice my language skills.

Everyone in college had fancier radios than mine: boom boxes that doubled as tape players, Walkman radios that played cassettes, or, later, radios with built-in CD players and small televisions. After that, we were on to laptops and iPhones and iPads.

However, I have always had a transistor radio, then and now, no matter where I travel. When I worked as a nanny in Spain many years ago, I relied on the radio to tell me when it was safe to go out because the Guardia Civil had stopped attacking student demonstrators. During the year I taught school in Mexico, I listened to my radio on the roof as I hung up laundry or sunbathed, and developed a taste for the kind of heartbreak best conveyed through Mariachi music.

In my late twenties, I trekked through Nepal and sat each evening next to solar-powered or battery-operated radios in tea houses with Nepalese women who squatted in their brightly striped aprons, all of us gasping at certain dire news reports or tapping our feet to the same music.

These days, I am most likely to travel to our summer house in Prince Edward Island. There, too, I have a transistor radio in the kitchen, where I happily give up BBC for CBC Radio and all of the news updates from across New Brunswick, Nova Scotia, Prince Edward Island, and Newfoundland. How else, for instance, would I hear about the lobster truck overturning on the highway in Saint John, or know about the fiddle festival in Rolo Bay?

There are obviously more high-tech ways to connect with the world in 2015. Whether we want news or music, we can program a device to deliver exactly what we want, when we want to hear it. Yet, somehow the allure of the portable transistor radio endures for me. I love the fact that I can’t program my radio or do anything with it but listen while my hands are busy, constantly being surprised by what I hear next.