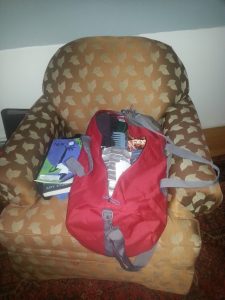 When I was a high school student, I had the opportunity to study abroad and chose the most distant, most exotic destination on the list of possibilities: Argentina.

I had never been on a plane before. I only had a vague idea of what was actually in Argentina, other than some weird cowboys called “gauchos,” according to one of the lessons in my Spanish textbook. Yet, I was not afraid.

In Argentina, I discovered my host family lived in the back of a garage in a poor suburb of Buenos Aires, but I was not afraid. Even when I got caught in the middle of a riot in the city and was tear-gassed, and even when I nearly fell down a the side of a mountain while climbing in the Andes with a school group, I was not afraid.

Homesick and bewildered, yes. But not afraid.

That study abroad trip to Argentina transformed me into a traveler. In college, I chose to travel and study in Spain, where I rapidly ran out of money and took a job as a nanny to three obstreperous Spanish children. My boyfriend was a Basque who with a motorcycle and had a habit of running guns for the rebels trying to separate their region from the rest of Spain. I was not afraid.

I was not afraid in Spain even when a friend and I hitchhiked along the coast with nothing more than oranges and cheese and bread to eat, and about eight dollars between us, or when I went to Morocco and a man tried to pull me into a car. (My biceps, strong from shoveling horse stalls in my mother’s barn, came in remarkably handy, as did the fact that I had two brothers.)

My next trip abroad was to Mexico, where I spent a year teaching in an American School. I was not afraid when a pair of armed men—yes, I do mean armed, with rifles—tried to “persuade” my roommate and me to go to a disco. We climbed out our hotel window and escaped. We laughed about it later. I was not afraid, either, when I rode my bicycle through the clogged streets of Guadalajara and was hit by a car. My bike was totaled and so was my face, but I was not afraid.

Nor was I done traveling. I went to Nepal, India, Malaysia, Indonesia, and Singapore in the last year of my twenties, and if I’d had any more money, or even another $50, I would have kept going. I lived on rice and fruit and carried my worldly belongings in a backpack; I was once hijacked on a bus by a gang of Javanese men trying to knife me for my wallet, but again, I fought my way out of that. I was not afraid.

I was not even afraid when I hiked up the side of a smoking, stinking volcano in Java, nor when I was trekking in Nepal and too stupid to know that I should have had real boots and, for God’s sake, an actual down jacket, because the snow was up to my armpits. I simply kept walking and made it over a mountain at nearly 18,000 feet.

Okay, I’m lying, a little: I was afraid in the mountains of Nepal. I really thought I would die there.

Since then, I have gotten married and had children. The moment I held my firstborn son in my arms, everything changed. I learned to be afraid. Not for me, but for my children. I was afraid they would fall when they were learning to walk and terrified they’d get hit by cars while biking. I was afraid of pedophiles and drugs and bad teachers and guns and car accidents.

They grew up anyway. Now they’re having adventures of their own, off to Europe and South America, Asia and Africa. Miraculously, just like me, they get on planes and just go.

Today, for the first time since my children were born, my husband and I are traveling again—really traveling, not just going on a vacation. We’re traveling first to Senegal, to tour the country with our oldest daughter, who is finishing her Peace Corps service there—and then we’re traveling to Spain.

Am I afraid? You bet. I’m afraid of plane crashes and parasites and terrorist attacks. I’m even more afraid of the things that might happen to our loved ones here while we’re gone—the children and elderly parents we’re leaving behind.

Yet, as we learn a few words of Pulaar and pack our bags, I’m happy not to be just an armchair traveler anymore. I’m about to have an adventure. Going out of my comfort zone makes me realize how many things I don’t need. My husband and I are traveling with just one carry-on bag, and in that bag our clothes must fit along with solar lanterns and many other gifts we’re bringing as gifts for the villagers who have taken such good care of my daughter. In other words, I will be limited to three outfits for 18 days, and not much else. It is more liberating than I ever dreamed possible.

I have no idea what it’s like to travel as a woman in late middle age, but I’m about to find out. Seeing my daughter and the work she’s been doing in Senegal gave me reason enough to get on a plane to a faraway place. The rest of this is just a bonus life lesson.