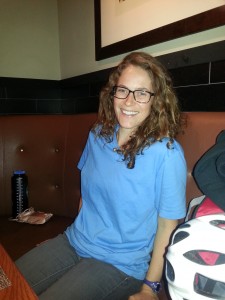 People who know me call me adventurous. I have climbed the Andes, hitchhiked around Spain and trekked the Himalaya through thigh-deep snow in March. But those people haven’t met my daughter. Compared to Taylor, I’m a TV-surfing couch potato.

I’ve encouraged and embraced Taylor’s adventures vicariously, from the year she learned to scuba dive in Indonesia to her work with the U.S. Forest Service on a remote Alaskan island. Nope, I didn’t like getting those emails reporting that she had nearly gotten the bends under water, or hearing about her close encounters with grizzly bears, but I always believed that Taylor was sensible and smart and would find her way home.

This, though, feels different. This past weekend, Taylor left as a Peace Corps Volunteer—part of her master’s degree program at Oregon State University—destined not for South America, where I thought they would surely send her because she speaks Spanish, but for Senegal, West Africa. As in, the part of Africa where the World Health Organization is predicting that there will be 21,000 people afflicted with the Ebola virus before it’s fully contained. (If, that is, they can contain it at all.) The Peace Corps pulled its volunteers from the three West African countries with the most cases—Liberia, Sierra Leone, and Guinea—but, since Senegal has so far seen only one patient with the virus, the organization is continuing its work there.

Good for them. I just wish my daughter weren’t one of their volunteers.

Taylor, though, could not be dissuaded from going. She believes in promoting sustainable agriculture efforts worldwide and is invested in learning more about population ecology and agroforestry. Nothing could prepare her better for a career in that arena better than working on projects through the Peace Corps. Plus, everyone she knows who has been in the Peace Corps says the same thing: It will transform your life.

Good for her. But I just want her to come home.

Often, however, we mothers have to step aside and sweep our fears under the rug. I believe, with all my heart, that the Peace Corps is absolutely right to continue their projects in Senegal and other African countries. Those countries need international assistance now more than ever.

And I do know that Taylor will come home transformed, because her world perspective will be both broader and deeper. In return, perhaps the people she meets in Senegal will know more about people from the U.S.–an essential cultural exchange, since we are all sharing the same fragile planet and its limited resources.

I am proud, terrified, joyful and amazed by my daughter all at once, every day. I wish she would come home right now, but I hope she stays in West Africa. If she does, the Peace Corps and her work in Senegal will shape her into the person she is already becoming: a woman who not only wants to do well in life, but one who is committed to doing good in the world.  A daughter who fills her mother’s heart with love.